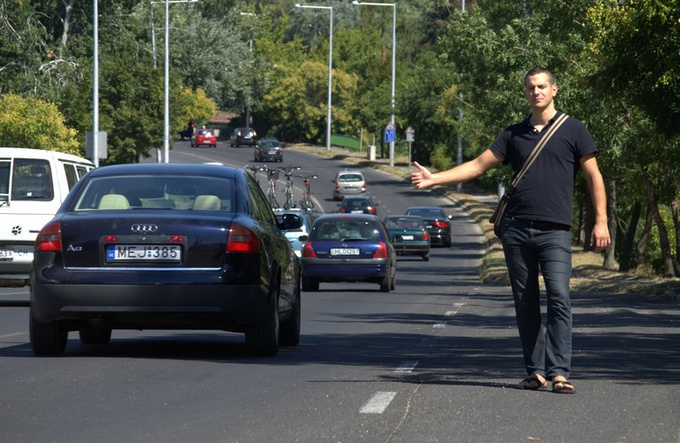 A significant percentage of the Hungarian population did not own a car until the early '90s, which played a large part in shaping the hitchhiker culture developing in the ‘70s and ‘80s. The influences of that era can still be felt if you try your luck hitchhiking today. The standard of public transport has risen significantly in the past 20 years, the majority does own a car these days, but hitchers still exist and many are still willing to take them for a ride, even if far less people choose this form a transport nowadays. Here are our tips if you would like to join the club.

Hungarian drivers know the universal gesture of the thumb sticking out, but holding up a sign with your destination written on it can be just as effective. Checking out the number plates makes no sense, as they don't indicate the hometown of the driver. They only contain three letters and three numbers that don't give away anything. Avoid cars with yellow number plates, those are likely to be taxis.

There's no rule to prohibit hitchhiking in Hungary. It is only prohibited on the highways, but you're free to do it anywhere else in keeping with the regulations applying to pedestrians. One of those prohibits any way of conduct that can confuse drivers, and with that, waving wildly and flashing your tits are kind of out of the question.

Pedestrians must stand on the pavement or, in the lack of that, on the emergency lane, the roadside, or the bicycle lane. 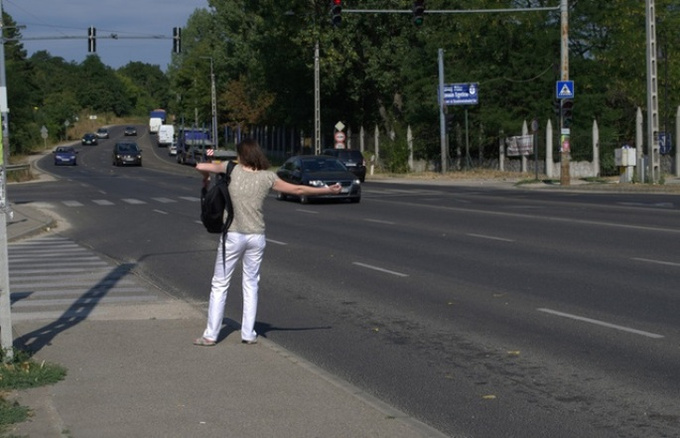 In some Eastern European countries (e.g. Romania) it is common practice that the driver asks for money for giving hitchhikers a ride, but not in Hungary. Should a driver try to rip you off at the end of the ride, threaten to call the police. If they don't take you seriously, do it (call 107).

Hungary used to be a part of the socialist block, or the Comecon, and one unfortunate aftereffect of that is that foreign languages are only spoken by a small percentage of the population. The elderly are more likely to speak Russian, the younger English, but you also have a good chance of meeting a driver who speaks German.

Although we regularly rank high on the international top list of suicide rates by country, murder is relatively rare. Public safety in Hungary is acceptable, and not just for Eastern European standards. Tourists do not suffer any more attacks here than elsewhere, and we never hear of hitchhikers being robbed or assaulted.

If you are a beginner, keep to these universally applicable rules:

Stand somewhere where the driver can spot you from a distance. Especially if the speed limit is high.

Stand somewhere where the driver can stop the car safely to pick you up.

If your destination is far, write the name of the place on a cardboard.

When you get in the car, take a good look at the driver. If he or she seems to be drunk, don't get in. Don't put your life in the hands of someone who might put it at risk.

Be nice to the driver so he won't be put off from giving others a ride in the future.