Readers fighting for seconds on Hungaroring

Remember, it’s Totalcar trackday this week-end! To get you in the mood, here’s our account of the last trackday held in June. Just spot the wheels and brake calipers and you might suspect it is not a stock Beetle. No, it isn't

The 3rd Totalcar trackday. If a petrolhead behaves throughout his lifetime, never revs a cold engine above 2000 rpm, changes the oil regularly, waxes the car with diligence and doesn’t store the remains of junk food under the seats, he’ll probably go to a place exactly like this after his death.

Why? Because those who had been quick enough to grab one of the 100 tickets that sold out within an hour could smear rubber on the track as they pleased. Just where Hamilton, Alonso or Button do, at the Hungaroring. Or because all kinds of vehicles were present from the Skoda 120 to the Ferrari: mass-produced and tuned ones, V6 turbos and hybrids, cars saved from the wrecker and top notch rides, daily drivers and race cars, vintage and new.

What else do you need? Mechanics available on the spot? Free parking and wheel change? Action camera provided and equipped free of charge? Transponders for hire? Professional measuring of laps? Boxes for hire? Nice weather? Activities to keep even the smallest of visitors occupied? Food, drink, fun and games? Check, check and check. We had them all. The mobile tyre-service was free for all participants

The atmosphere was smashing. Noses filled up with the smell of burnt rubber, ears got plugged with the sound of shrieking engines while brains filled with adrenalin and memory cards with pictures taken of the Ponton and the Aardvark.

Those who didn’t race didn’t stand a chance of being bored, either. A go-kart and off-road track, driving technique courses, a track for practising the road regulations for children, an inflatable jumping castle, prize games, simulators, activities offered at the car manufacturers’ stands, a small-scale Hungaroring, electric cars and motorcycles for the small ones made sure everybody was busy. There was no entrance fee, and the same applies to this weekend. The use of the race track cost HUF 25,000, covering 25 minutes of circling four times during the day, from 10 a.m. till closing time. A box cost HUF 10,000 for the day, a transponder could be hired for HUF 1,500. An off-road taxi took three for HUF 3,500, taking the driving technique course cost HUF 5,000.  This time longer courses will be held so the prices will change too: 90 min. course for HUF15,000, 240 min. course for 24,000. One of our writers, Sipos (aka Sipi) took part in the course with his Merc and highly recommends it, swearing it was as useful as it was fun. Just look at his face in the video taken during his stint. Everything was perfect. 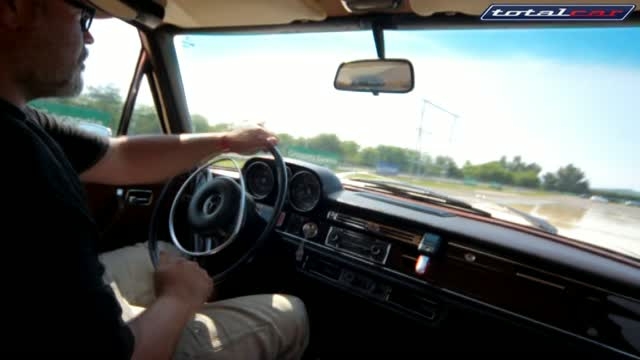 OK, maybe not everything. István "Kopasz - The Bald" Kroneraff was dashing forward unstoppably, positive that nothing could stop his BMW until he saw his own wheel overtaking him. Mr Kroneraff's BMW before it lost a wheel. Helpful hint to everyone: when replacing a wheel, make sure to check your wheel bolts after driving a few miles

Sipi had everything planned, the tyres had been changed on his Sierra hours before the race but he still had to face the problem of his fading brakes. Well, it is not a typical trackday car, but Sipos loves it

Zsolt "Göbi" Göbölyös had prepared his Beetle for the day like a true professional, and everything went according to plan until he realized halfway through the first heat that he had forgotten to fill up. The shared Shitgun of András "Bandi" Stump and Steve "Pista" Vályi did surprisingly well, and had it not been for a flat tyre in the 3rd heat, it probably would have kept on puffing the exhaust gases back into the passenger compartment merrily until the end. Hardcore drifters would call it a "Missile", but everyone knows the car by it's nickname: The Shitgun

Gábor "Karotta" Bazsó had put the emphasis on safety, even installing a fire extinguisher into the Aardvark – need I say his was the only car that caught fire? Then his diff conked out, but after a 4-hour long repair session the world was a wonderful place once again and Karotta could carry on. Instead of horsepower, Zsolt Csikós beat his rivals by high beams and fog lights, but the 51 year-old Ponton took on the many challenges with ease. The next trackday is held this week-end. Should you have missed the previous ones, it’s high time you came round. We promise you, the experience will be an unforgettable one. Every petrolhead’s heaven. And you don’t even have to die to go there. DS, the miracle of travelling (HD)

One of the most magnificient cars of the last century was taken for a review by the Totalcar magazine.