Police will even catch the rich

Is Tax the Rich going to pay?

Although it is funny, the policemen didn’t appreciate the video. The team could be facing a fine this time. 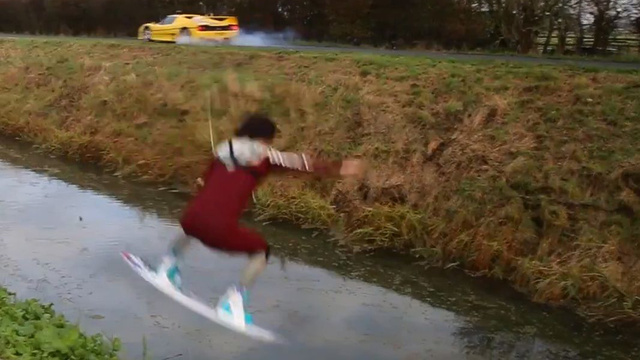 Shooting extreme car videos is a dangerous and mostly illegal activity, but the makers hardly ever get fined. Except when they produce evidence of having committed an offence. The Tax the Rich team seems to have made that mistake while shooting their latest video.

Towing a wakeboarder tied to the back spoiler of a Ferrari F50 through a narrow channel is probably good fun and is certainly an impressive, albeit silly and irresponsible stunt. Many Ferrari lovers may have felt a pain in their chest at the sight of the rope being tied directly to the wing and the wakeboarder getting into the car soaking wet, but it looks like the Tax The Rich team has more serious objections to worry about.

The police have noticed that the team, which is usually careful to only run amok on private property, shot their last video in a public area. And while there probably aren’t any laws to directly prohibit the towing of wakeboarders, the coppers have found another excuse for teaching the boys a lesson: speeding. Whether they manage to collect sufficient proof of it having taken place is questionable, though, as the tachometer itself is not shown in the recording. Stay tuned. Ran out of gas? Don’t worry, SuperDucatista is to the rescue!

A Ducati rider pushing the truck out of gas.