Disclaimer: the author is biased and clearly has some issues, as no sane man would need or want a rattling horseless carriage with a nuclear reactor in the front. Sincerely: the rest of Totalcarmagazine.com 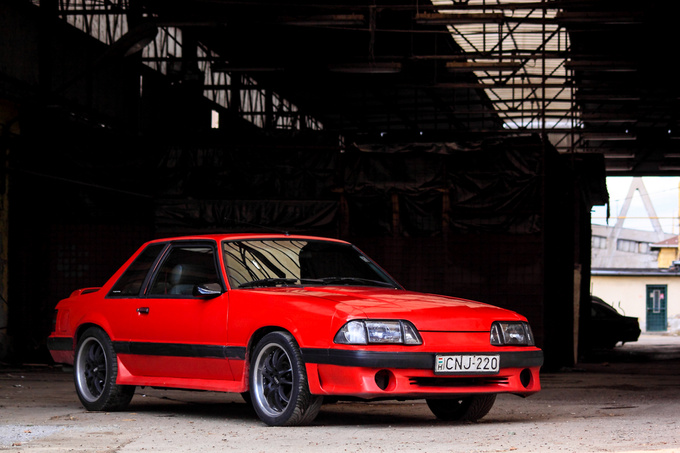 I've been in love with this car for quite some time now. With this very car actually. It belongs to a friend I used to work with. His name is Ivan, and no, he is not Russian. His friends call him Bandit and yes, he knows that the original Bandit drove a Pontiac, and not a Ford. The first time he told me that his daily driver is a Mustang, I asked him to show it to me, so he pointed at something red in the parking lot.

"I cannot see it," I said. "That red Ford Escort is blocking my view". I'll spare you from his expletives, as it was the Escort, obviously. A 1987 Ford Mustang 5.0HO (HO stands for high output). At first I only felt sorry for it, though it could've been a lot worse. (I'll come back to that later.)

The Mustang's third generation was designed by John J. Telnack. The same guy who came up with Ford's New Edge Design, making hatchbacks like the Focus digestible again.

Telnack relied heavily on his ruler when drawing the Mustang, leaving only the wheel-arches without a straight line. During the design process Ford's management was adamant that anything even remotely reminding of a slantnose is out of question. Telnack still managed to convince them, saying it's very European – which is as true as fortune cookies being Chinese. Yet, it was an instant success, since Ford sold 370 thousand Mustangs in the first year alone, even with the miserable variety of available engines. 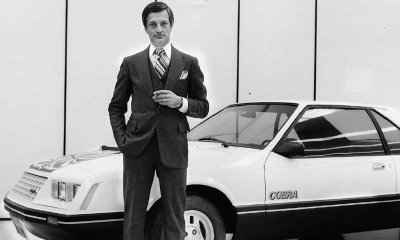 In 1987 Ford wanted a new, fourth generation Mustang. Since there was again (or still) a financial crisis, they choose the Mazda MX6 as its basis. Some fancy trimming here, some cool Mustang decal there, and people will love it, right? One might get over the fact that a great American icon is built on a Japanese lowcost-GT, with a very strong emphasis on 'might'. But can you name an FWD muscle car? I mean, apart from the Toronado? Right! So, because of the great public outcry and the Mustang-enthusiast lynch mob forming outside Ford's front door the management decided to refresh the '79 Mustang instead.

The facelift went better than anyone expected. The new design, which resembles the sports cars you see in colouring books, produced an impressive 0,36 cW in the windtunnel. At the same time, the chassis, especially of the coupe, was so light and rigid in Mustang-terms that it became and still is a popular choice for track racing. In the 80's and 90's it even showed up on the European tracks, in DTM and BTCC as well – just to name a few. In the meantime, the MX6 hit the showrooms as Ford Probe. Pheew! 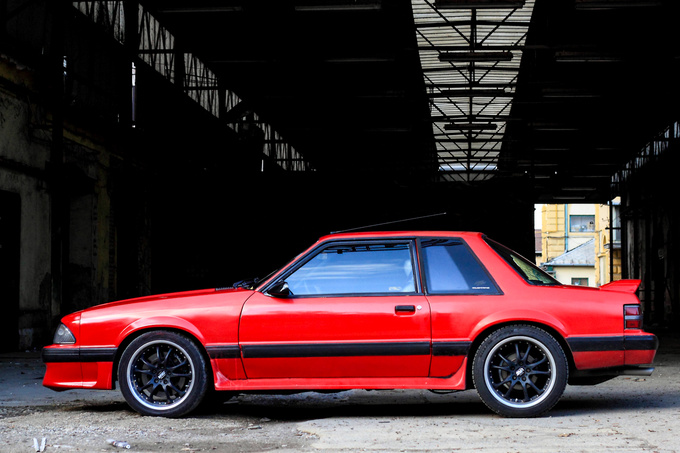 The first time I was listening to Bandit's stories, a strange, uncomfortable feeling started building up in my stomach: I actually like this thing. Yes, its looks, dammit! It's blatant honesty that is its most capturing attribute. It's a simple, cheap car just to entertain you. Bandit bought it for roughly 2000 Euros, almost ten years ago. His other choice would have been a V6, supercharged T-Bird, but he stuck to the pony eventually. Normally 225 PS, a high output V8, a 5-speed manual and a live axle in the back is enough to bring a smile on anyone's face. Well, only if it's working of course. Since Bandit is an IT guy at a big corporation, he didn't have the financial ammo to throw the keys to Chip Foose and expect a shiny, beefed up Mustang to be delivered to his driveway. 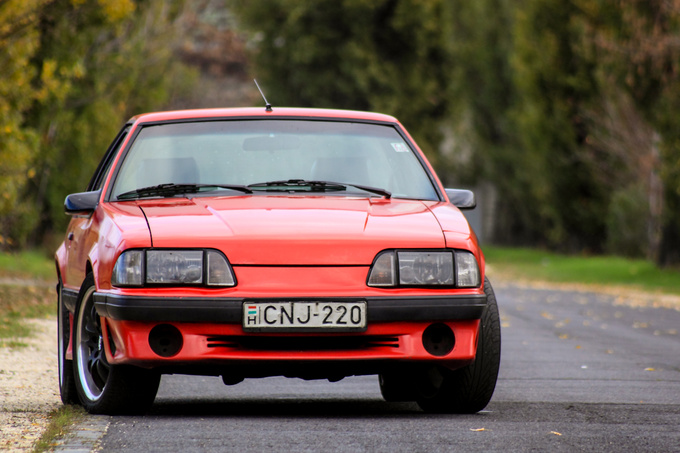 So, he started fixing it up himself. It's an ongoing project ever since, the type you'd see with the Millenium Falcon or the Hungarian Parliament: you start at one end, and by the time you reach the other, you can start fixing it all over again. From the beginning of course! In Central Europe it's not that easy, since one has to wait two-three weeks for a waterpump to arrive from overseas. But Bandit won't give up. 130 thousand kilometers, 6000 Euros and almost a decade later, he still smiles every time he turns the ignition key. 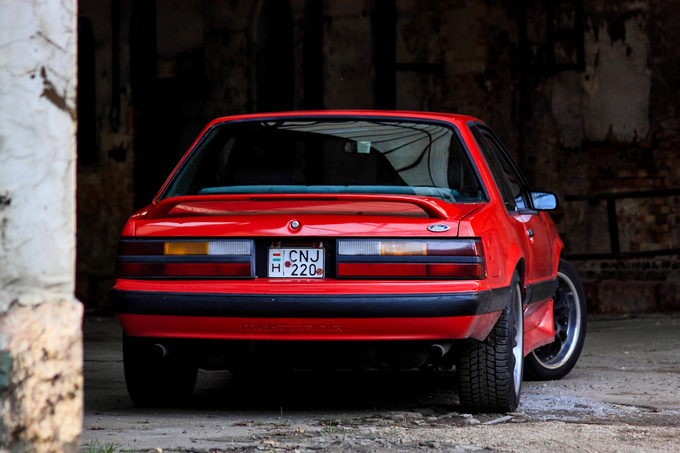 The first time I sat in the Mustang, almost five years ago, I was still full of the pompous arrogance of a vintage Mercedes owner. Mind you, I had all the right to feel a moderate shock when looking around inside. A black and red dashboard, made from that quality plastic you only get from Chinese knock-offs, red trims on the doors, a torn, tan leather seat with a brown tennis raquet for a headrest. Still, the seats were surprisingly comfortable. As I later found out, they were from a '79 Mustang Pace car.

A car being chosen to be the Indy pace care is both a great honor and a huge marketing possibility. The Mustangs were chosen four times to lead the way in Indianapolis: 1964, 1979, 1994 and 2010. In 1979 Ford contracted Jack Roush to build three pace cars. It got a stronger 302 cui V8, stiffer suspension, with stronger springs and shocks, which was later known as the TRX package. It got it's names from the Michelin TRX racing tyres, which were also part of the package. The car received a silver and black paintjob, and orange decals. The three original pace cars had targa tops, which only became an available option in 1981. 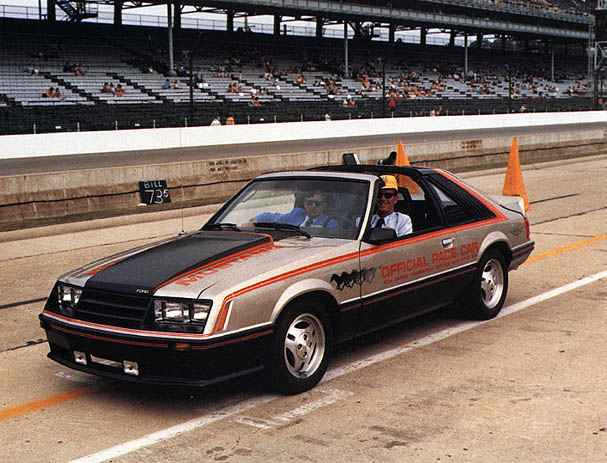 Ford made a limited edition from the original pace car but with the highest ever production number – 10 478 to be exact. It was only available with the same engines as the normal Mustang, a 5 litre V8 with 140 PS and a turbo-charged, 2,3 litre four-cylinder with 132 PS. All pace car buyers were supposed to receive a matching leather jacket as well, but many were stolen.

The price of a pace car today is somewhere between 8 and 12 thousand Euros, whereas the jacket costs in the 200 Euro region. The three original pace cars however are not for sale. Two of them are in Jack Roush's personal collection and the third one is in Ford's museum

I've been around Bandit's car for a couple of year now. Heck, I even towed it and pushed it. But I have to admit it's very-VERY close to my heart. I actually wrote my first review about this car...and it's always a great morning when I wake up knowing that I'm going to drive it. Even if there are some (ok...a lot of) things I have to prepare myself for. 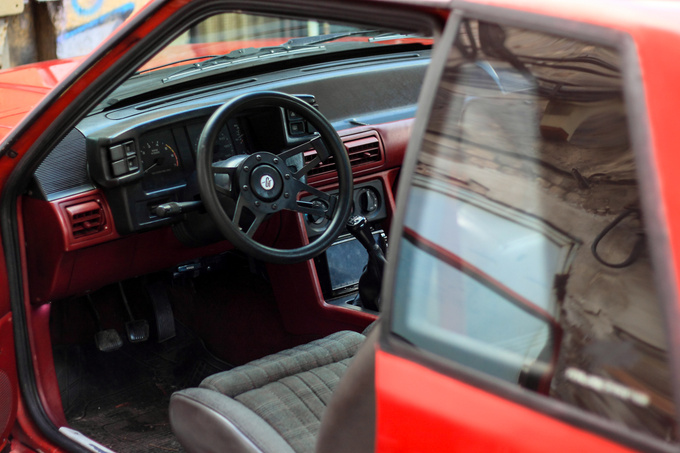 I have to massage and warm up my left calf, because the Ford Racing clutch is one of the toughest I've ever seen. Same thing goes for the T5 transmission. I already know that my right shoulder will be rather sore that night. I have to change my perception of the road and how to drive in traffic, since I know I won't see a damn thing in those tiny mirrors. And I won't stop very quickly either, given how weak the brakes are. I pray for dry weather and clean roads because the Cooper Cobra tyres it has only grip on clean, dry asphalt. I'm prepared for bouncing around on the road because that Flintstone-era suspension. I know the plastic interior will rattle, my seat will rock, but I'm gonna roll! 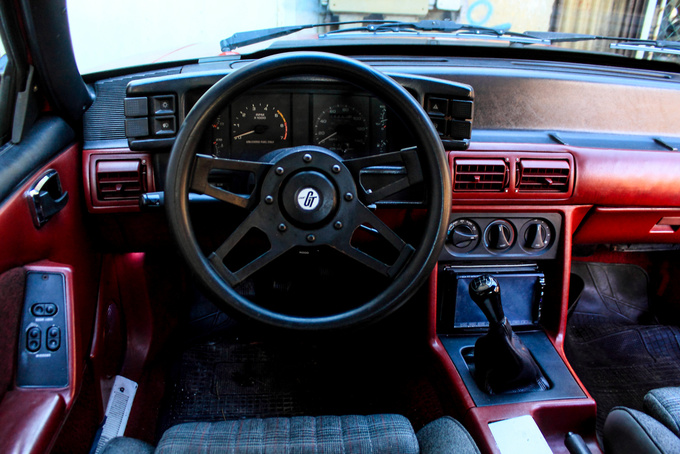 Because when you start the engine, you forget everything. Every bit of annoyance, the lack of engineering, comfort or precision. The 302, beefed up to about 290 PS and the exhaust Bandit put under it gives it a rather unique sound. You see, the run-of-the-mill V8, be it German, Italian or American makes one particular sound. It only gets louder, and it's pitch higher when you floor it. But not this Mustang! When idle, it rumbles. When you start pushing it, it howls, and when you floor it, it screams. All three sounds remarkably different, but beautiful all the same. 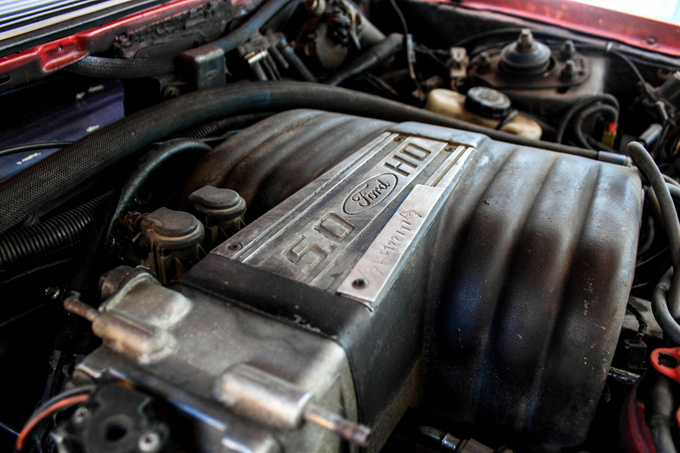 When you hear that sound and you unleash every ounce of power it has, you just forget everything. It literally becomes a mustang, a wild horse that you first wrestle, never really, truly tame but still scream when you manage to ride it. The screeching steering wheel, and the wheels at their end become extensions of your arm, and the throttle is the spur on your heel. It's one of those rare accidents when a simple American pony car, with cheap...well...everything and a live rear axle becomes a true driver's car. You enjoy every drop of fuel it burns because the excitement is always there. 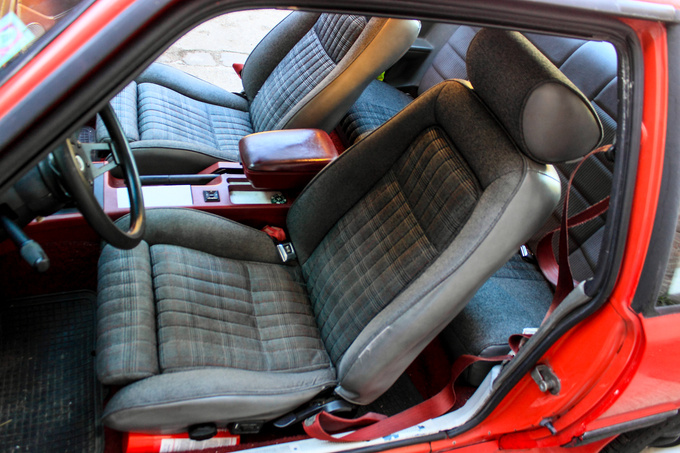 I drove an Audi RS6 Avant the other day. With 560 PS it has almost twice the power and with an acceleration of 3,9 seconds almost half of what the Mustang can do. And you know what? I was bloody bored! True fun does not come from sheer power though the Mustang has plenty. It's not a real lightweight either, being almost one and half tons. It will eat 13 litres of gas when you're calm, which you cannot be, so you'll pour 20 litres in it after every 100 kilometers that you actually really enjoyed. This Mustang is the F-word you'll shout to everyone who doubts it.