DGT, as in digital

Take a Golf Mk 2 or a Kadett E, set them alongside this Fiat and you can’t help but admire just how intense the Tipo was back in 1988. A brand new platform, legendary Italian design, and an abundance of engineering tricks. Fast forward to today, and it’s nothing but a disposable beater. Yet, some people choose to keep them alive, and are happy doing so. 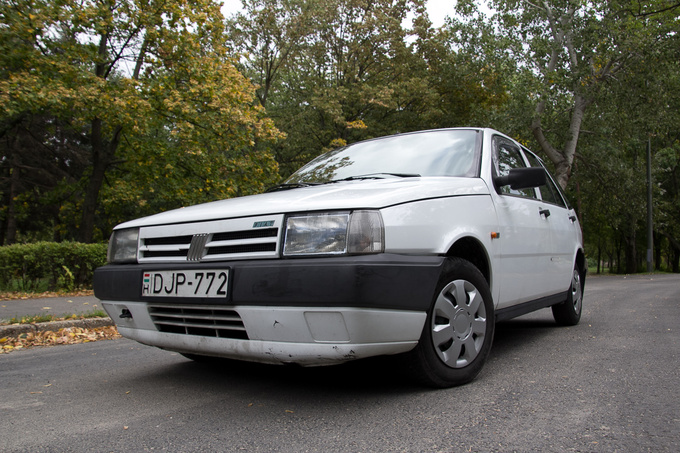 Proud of its war wounds

Most people have kept their Tipo simply because selling and deregistering it is just too much hassle and you can keep it running for less than the administrative fees of getting rid of it. What a disgraceful end for a once brilliant car that, back in 1989, was elected Car of the Year ahead of the Opel Vectra and the VW Passat.

This Tipo here would probably be better off melted down and recycled into rails but because it is essentially a family member it was saved from its sad fate. In fact this white Tipo DGT is better off than most of its contemporaries – it is intact for one thing. While it is not a pampered classic car kept in a heated garage it has foregone the typical fate of being doctored by bungling mechanics. It has also managed to steer clear of Lexus lights and cheapo subwoofers. It lives however the boring life of everyday cars, enjoying some regularish care. 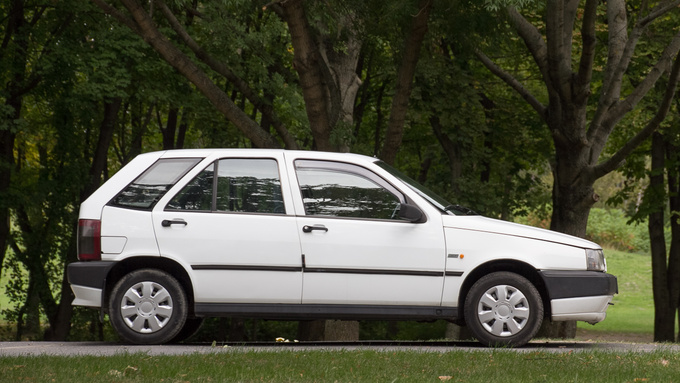 The door trim is still there on the right side

I can't really recall, being way too young to remember, but I am sure the Tipo was one hell of a car in 1989. Designed from scratch, its foundations were subsequently used for the Tempra, the Lancia Dedra, the Alfa 155, as well as the Fiat Coupé and the new Lancia Delta. It could have been a lucky coincidence but the car was unveiled while its competitors were still way logging behind of their scheduled facelift. The Tipo was an instant hit as it entered the market. 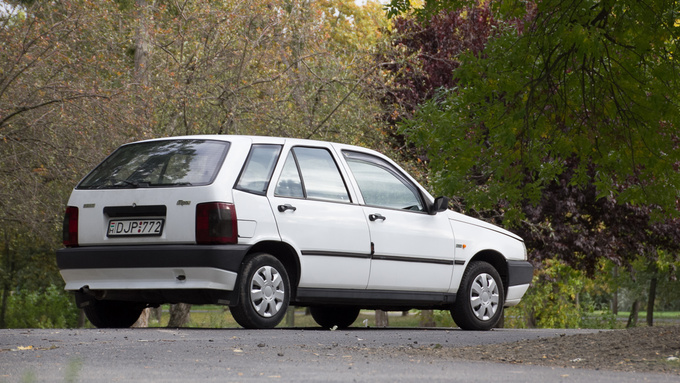 Fiat has always been known as a visionary innovator of small cars – think of the 127 for one. The Tipo is almost as sensational but it will probably take another few years before its merits are duly recognised. It was advertised as offering the legroom of the Sierra on an Escort footprint. Indeed! Are you worried about the proverbial rusting of contemporary Fiats? You need not be, the Tipo was made from galvanised steel panels, and is not prone to corrosion, especially the facelifted version. It runs on 13 inch wheels which take away very little room from the interior. It has a feather light nose part, it has no inner wings (those were not used until later). In short, it is full of trend-setting technical innovations capped with an attractive specification – no wonder it sold in large numbers.

Much of that glamour is gone now. Plastics have become brittle and cracked, panel gaps open up at random, the only thing that hasn't faded away is the Italian design. Shed your prejudice, hard though it may be, and you'll have to admit it still looks awesome. 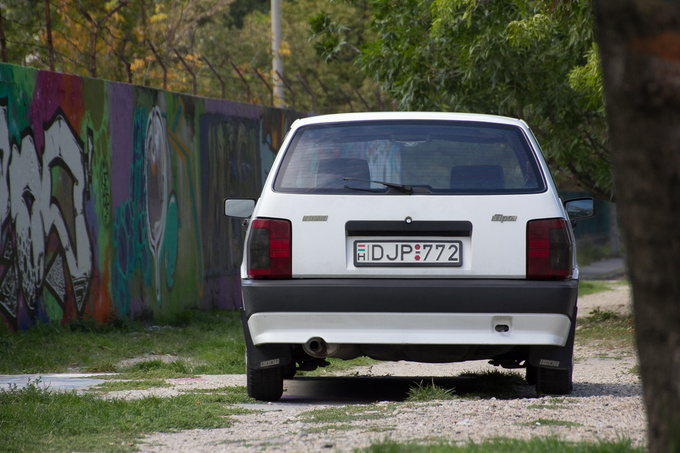 I love those combination lamps

Its rear looks the strongest, with the oversized combination lights with those smooth, darkened lenses. But also the details, such as the door handles echoing the overall shape of the car, the rear view mirrors attached on posts that look like a vacuum hose, an act of rebellion in the 80's, or those funny looking side repeaters – honestly, there is a lot more joie de vivre in this design than, say, in a Golf II. Please notice that the headlights are bricks set against a fundamentally rounded silhouette, yet they hardly look out of place. While the Tipo is not exactly a classical beauty it does have a unique charm.

And that's before seeing the interior. The plush-covered seats, still firm after 24 years and at least 200000 km, make German seats feel like hospital chairs in comparison. Some of that gloriously soft upholstery also made it to the door panel, making the ambiance feel like you are sitting in a VIP box at the Scala in Milan. Yet the true ingenuity of the design reaches its absolute peak at the dashboard, an injection moulded sculpture, itself the very definition of clean design. 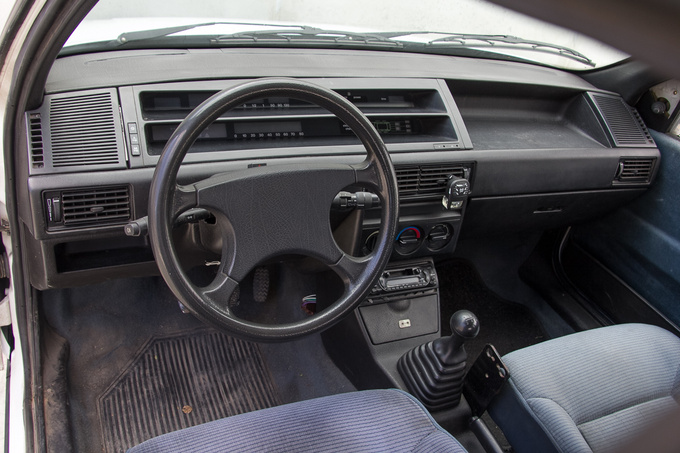 There are no regular controls apart from the three rotary dials of the aircon. Okay, there are two minor sets of buttons cleanly integrated into the dashboard frame but apart from those every function is controlled from that pair of spaceship-gun-turret of a steering column stalk. I mean, they are lit up for chrissakes. I wouldn't be surprised if you could actually control the Death Star from behind the wheel. Let this be a lesson in grandeur to all revolutionaries of dashboard design: leave A/C controls intact and hide everything else from sight. That's how it's done. There's absolutely nothing here interrupting the rectangular structure of the dashboard, it looks solid as a block of flats. 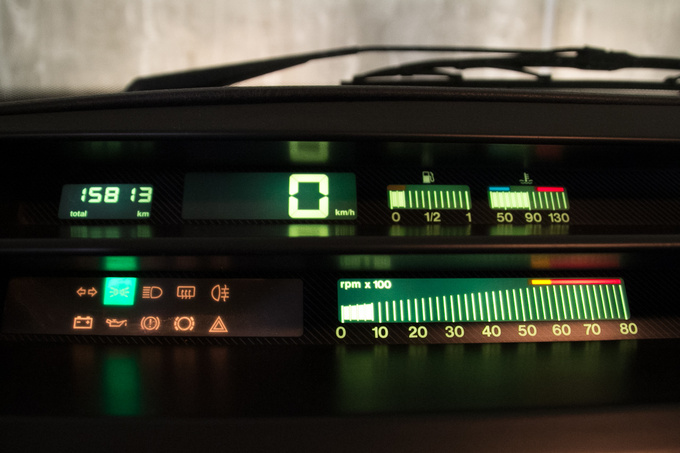 Once the definition of futuristic design, the digital displays still look awesome in the dark

Of course none of that would be possible without the digital display that gave the Tipo DGT its name. There is no canopy to disturb the unity of the dashboard, display sections were arranged in two rows, including everything from the tachometer to the speedometer, from the digital clock to the control lights. What a glorious orgy of design, provided you still have a feel for the 80's. However, what is really amazing that it is still functional after all these years. All it takes is a little bit of care and everything works fine, with only the tachometer taking an occasional break, settling for a steady 3000 rpm with complete disregard to the actual engine speed. 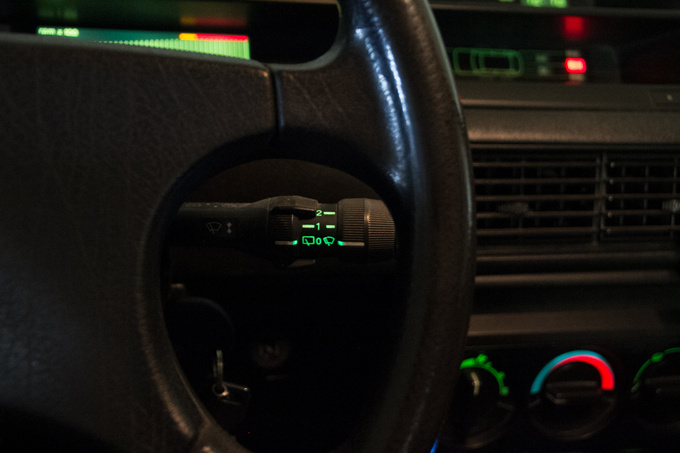 A lit-up column stalk – have you ever seen anything this crazy?

Of course all of this does not make the Tipo look or feel modern. Far from it. All panels are askew, plastics are slashed, this car has seen some tough times, including hitting a wild game and then some which resulted in a rocker panel transplant on the right hand side. If you look around on the inside you will find other signs of abuse, even the roof headliner is worn. Yet, I could easily warm up to its battered state; I'd rather travel in this faded sense of luxury than pick something new and mediocre.

Because the Tipo does have an air of elegance and grace that new budget cars lack altogether. Even Fiats. All plastics including the dashboard feel real cheap and cold but that plush upholstery more than makes up for it. This is a fabulous little car for driving around town. 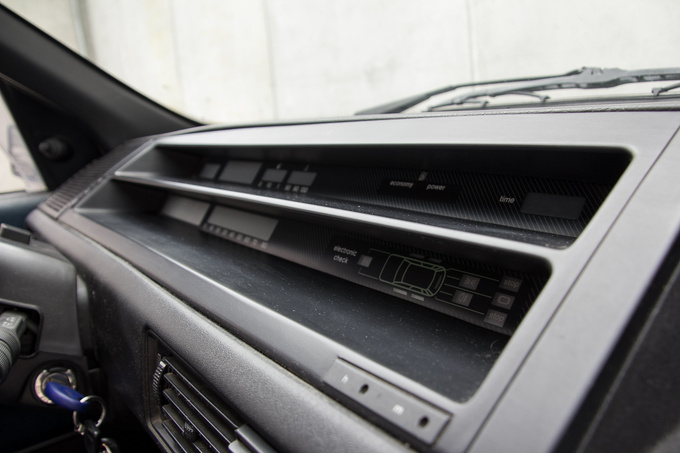 This is the lights control panel. It works 90% of the time.

You cannot help but marvel at the spontaneity of carburettor-fed engines. Your foot moves the throttle via a cable and you can feel the air gulping the petrol. Fed through a double Weber, this 1.4-litre engine is no body builder, churning out 70 to 80 PS, depending on what kind of petrol you feed it, but that should be enough for shaking a leg. It runs nice and smooth, with no excessive noise, and you can shift up to fifth in town, with the low-down torque plenty enough for this one-tonner.

When new, the gearbox must have been an amazingly masculine, raw exercise of power, except by now the linkage is all worn and wobbly. But you'll get used to this in no time if this is not your first time driving an older car. 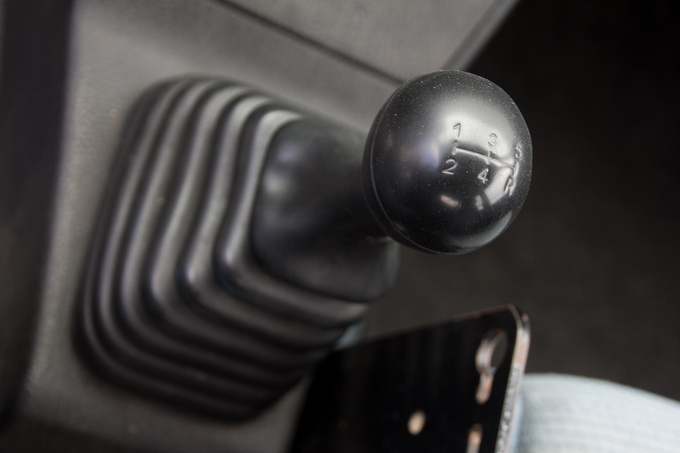 What a shame it’s worn out

Like the gearbox, everything else is a bit shabby, a bit flabby, but still seductive after a few beers. Once in a while you hear a muted thud from the running gear but the overall straight line stability is good. Steering is like it used to be in the 80's – feather light and uncertain in centre position and it gets firmer as you turn the wheel. Breaks have been fully refurbed with every component replaced yet it feels extremely spongy: it will stop you alright but it feels like you are stomping on squishy slugs.

There is not a single part on this Tipo that says go on, race me. On the other hand, the car is an open invitation to relaxed, comfortable driving. I could not originally fathom why its owner would not sell this piece of junk, but now that I have driven it I see what he likes about it. You open the motor sunroof, sit back and let the finest Italian nonchalance carry you over the insignificance of creaks and cracks and other minor imperfections. 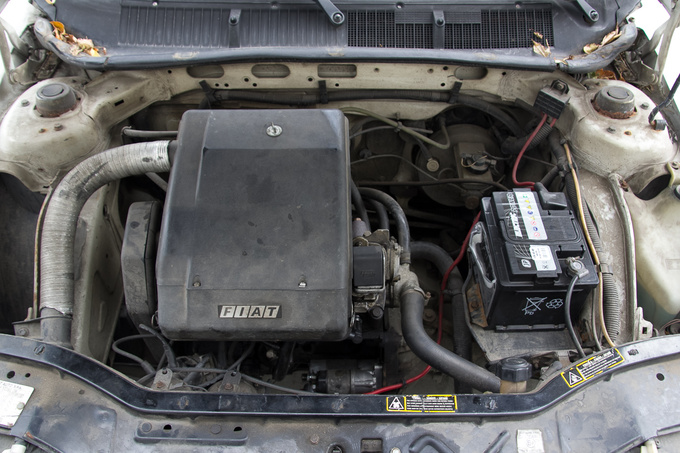 Behold an engine cover with actual functionality: the big black box is the air filter housing

The jerky clutch is the most disturbing part. It took me a long while to get a feel for it, allowing me to start off relatively smoothly. You let the clutch slip long, then lift off the accelerator and jump back on it as the engine settles into an idle. The owner is already on the hunt for a cheap clutch set.

The only thing stopping you from fully enjoying the ride is the knowledge of just how much you actually need to spend on what is essentially a disposable car, provided you have a minimum sense of respect for all things automotive. Over the last six years there has been a cam belt failure resulting in an engine overhaul, and some body work around the rocker panels. The starter motor needed an overhaul, so did the brakes, and now it's time for the clutch. There have also been a handful of other small things but ongoing repair jobs are to be expected with a 24-year-old car. 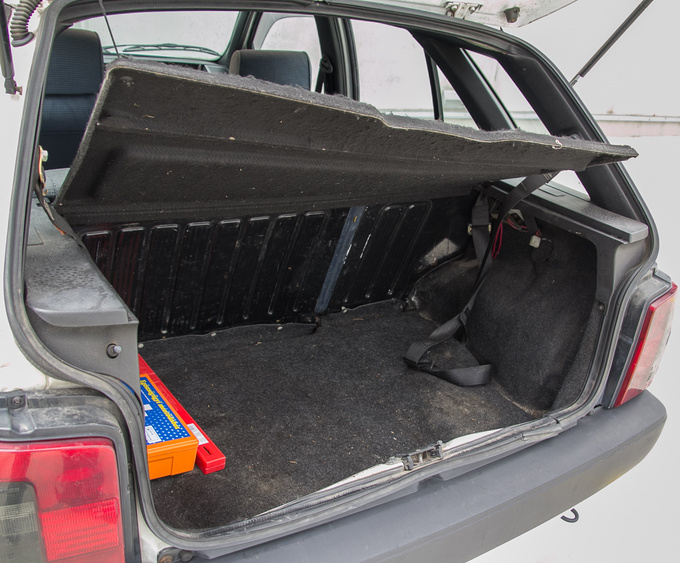 This is decidedly not new

Driving a car like this in 2014 may not sound reasonable but it is understandable. Theft is a non-issue, and there can be no failures or breakdowns that would require extreme expenses – you may be unprepared for a hasty fix job but it will never hit you unexpected. Also, when a car is this old brands and types no longer play a role, it all comes down to individual condition and sheer luck. And this invisible, if not disgraced Tipo has carried over a handful of merits from its youth that make it likeable. Which is probably the most important thing about a car, any car.